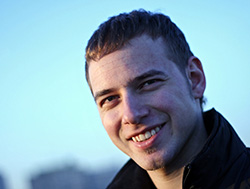 Compositions by Alexey Arkhipenko have been described as "experimental and saturated". He often mixes different styles, for example:

In the piece for percussion Mechanical Cat (2015) he explores the limits of atonality in percussion instruments.

Alexey Arkhipenko developed several composition algorithms, which can compose music based on several initial parameters (QGen, CMix, NotesTyper). Results of the work of these algorithms is known as Rhaos project and the most known tracks are Western Train Suite and Lost City. While listening to these pieces you can hear how different rules form the atmosphere of computer generated music.